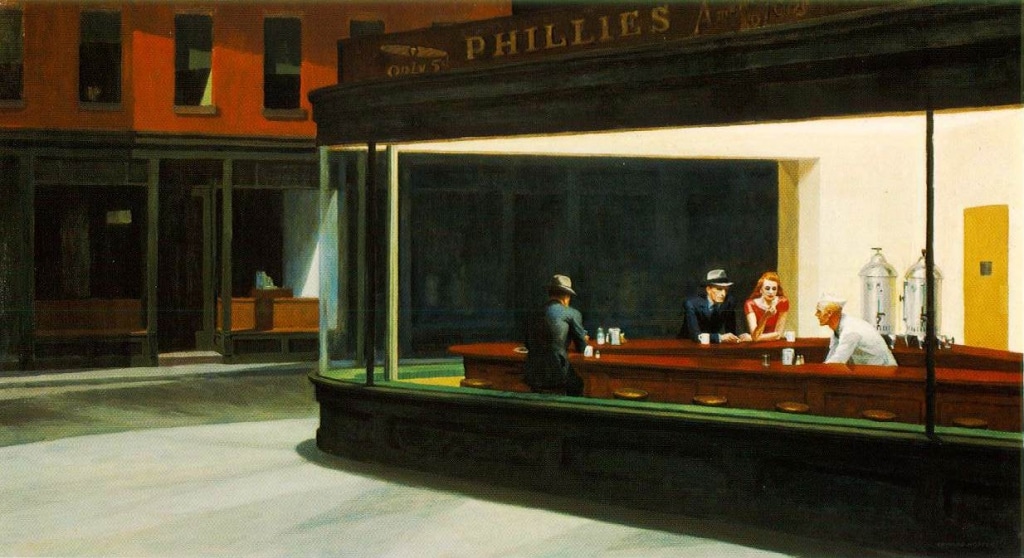 It is night
and the city is deserted.
The lucky ones are at home,
or more likely
there are none left.
In Hopper’s painting, four people remain
the usual cast, so-to-speak:
the man behind the counter, two men and a woman.
Art lovers, you can stone me
but I know this situation pretty well.
Two men and one woman
as if this were mere chance.
You admire the painting’s composition
but what grabs me is the erotic pleasure
of complete emptiness.
They don’t say a word, and why should they?
Both of them smoking, but there is no smoke.
I bet she wrote him a letter.
whatever it said, he’s no longer the man
who’d read her letters twice.
The radio is broken.
The air conditioner hums.
I hear a police siren wail.
Two blocks away in a doorway, a junkie groans
and sticks a needle in his vein.
That’s how the part you don’t see looks.
The other man is by himself
remembering a woman,
she wore a red dress, too.
That was ages ago.
He likes knowing women like this still exist
but he’s no longer interested.
What might have been
between them, back then?
I bet he wanted her.
I bet she said no.
No wonder, art lovers,
that this man is turning his back on you.

The three men are fully clothed, long sleeves,
even hats, though it’s indoors, and brightly lit,
and there’s a woman. The woman is wearing
a short-sleeved red dress cut to expose her arms,
a curve of her creamy chest; she’s contemplating
a cigarette in her right hand, thinking that
her companion has finally left his wife but
can she trust him? Her heavy-lidded eyes,
pouty lipsticked mouth, she has the redhead’s
true pallor like skim milk, damned good-looking
and she guesses she knows it, but what exactly
has it gotten her so far, and where? — he’ll start
to feel guilty in a few days, she knows
the signs, an actual smell, sweaty, rancid, like
dirty socks; he’ll slip away to make telephone calls
and she swears she isn’t going to go through that
again, isn’t going to break down crying or begging
nor is she going to scream at him, she’s finished
with all that. And he’s silent beside her,
not the kind to talk much but he’s thinking
thank God he made the right move at last,
he’s a little dazed like a man in a dream —
is this a dream? — so much that’s wide, still,
mute, horizontal, and the counterman in white,
stooped as he is and unmoving, and the man
on the other stool unmoving except to sip
his coffee; but he’s feeling pretty good,
it’s primarily relief, this time he’s sure
as h*** going to make it work, he owes it to her
and to himself. . . . And she’s thinking
the light in this place is too bright, probably
not very flattering, she hates it when her lipstick
wears off and her makeup gets caked, she’d like
to use a ladies’ room but there isn’t one here
and . . . how long before a gas station opens? —
it’s the middle of the night and she has a feeling
time is never going to budge. This time
though she isn’t going to demean herself —
he starts in about his wife, his kids, how
he let them down, they trusted him and he let
them down, she’ll slam out of the g*******d room
and if he calls her Sugar or Baby in that voice,
running his hands over her like he has the right,
she’ll slap his face hard, You know I hate that: STOP!
And he’ll stop. He’d better. The angrier
she gets the stiller she is, hasn’t said a word
for the past ten minutes, not a strand
of her hair stirs, and it smells a little like ashes
or like the henna she uses to brighten it, but
the smell is faint or anyway, crazy for her
like he is, he doesn’t notice, or mind —
burying his hot face in her neck. . . . She’s still contemplating
the cigarette burning in her hand,
the counterman is still stooped gaping
at her, and he doesn’t mind that, why not,
as long as she doesn’t look back, in fact
he’s thinking he’s the luckiest man in the world
so why isn’t he happier? 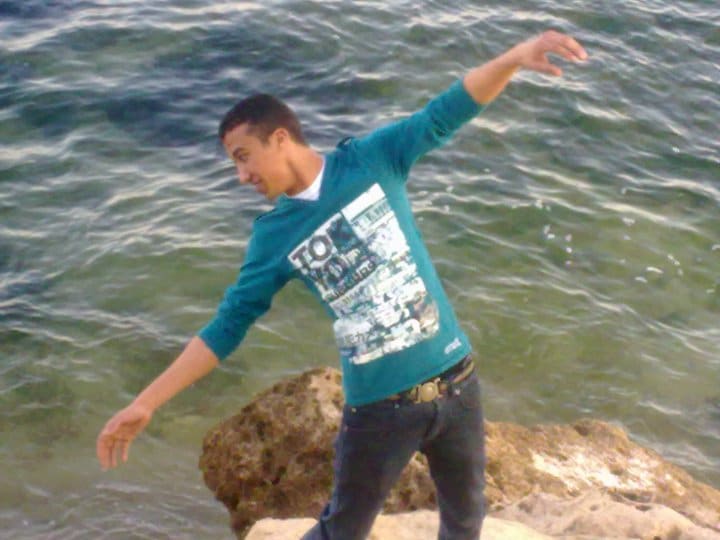 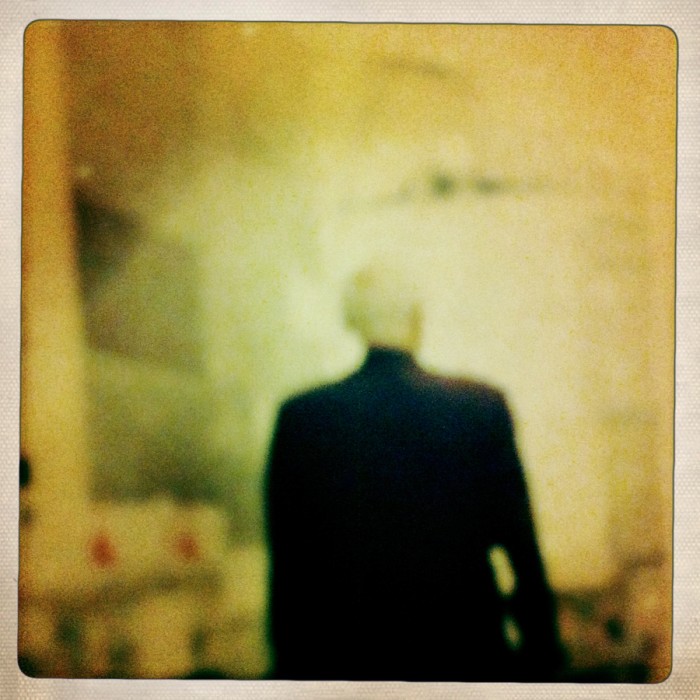 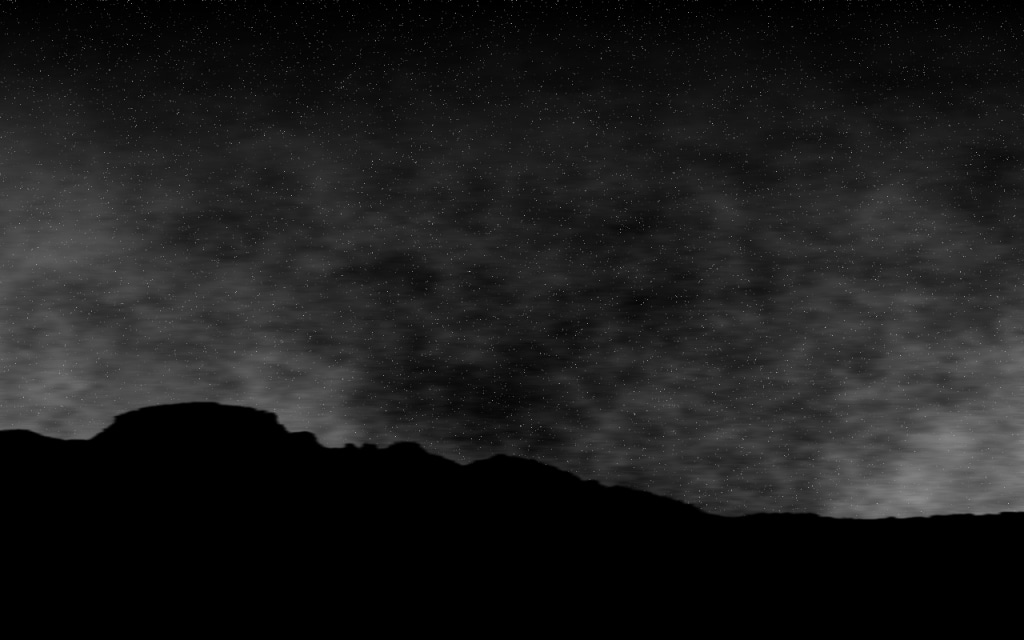